Armed with an amazing book — Hallowed Ground, A Walk at Gettysburg by James M McPherson, lovingly loaned to us by Brother Rik, we eagerly anticipated the next step in our adventure.  We departed Wytheville KOA at 8:30a and after a planned stop for fuel & window cleaning, we were on the road by 9:00a for what is planned to be our longest day of the trip at 326 miles.  We were again shooting for 3-3-3 – as a 3p arrival seems so appropriate.

While the Interstate has some disadvantages with speed and amount of traffic, especially truck traffic, it also affords access to truck stops and rest areas.  At the first rest area, Admiral Jann took over the helm for the first third of the trip, Captain Bill took round two and after a late stop for lunch, we had about 80 miles remaining.  Hoping to get into the campground before an anticipated deluge, we quickly hoped back on the road.  Luck was not on our side, with what apparently was a relatively major accident about 10 miles ahead – we lost about an hour with crawling and stopped traffic.  Once clear of the emergency vehicles, we picked up speed only to be met with the anticipated deluge of rain.

Fortunately, the rain subsided by the time we arrived at Gettysburg Campground and got settled in a lovely spot for our three days.  We have found that the “marriage saver” radios from Ivory Lady work just as well with Contessa for positioning the coach.

Friday morning, we headed directly to the Gettysburg Visitors Center to arrange for the events we wanted to be sure not to miss.  The Visitors Center houses a spectacular movie theatre presentation of the Battle of Gettysburg and then provides one of only three cycloramas in North America – the other two being in Atlanta (Battle of Atlanta) and in Quebec City (the Crucifixion of Christ).

Truly the turning point in the Civil War (or the War Between the States, if you are from the South) occurred here on July 1-3, 1863.  General Robert E Lee and his Army of Northern Virginia had recently seen two great victories in Fredericksburg and Chancellorsville, leading 21 year-old Captain Oliver Wendell Holmes Jr to say “I’ve pretty much made up my mind that the South have achieved their independence.”  Lee understood that the longer the war raged, the North would benefit from more soldiers, more supplies and better supply routes.  He also knew that the Union forces were having much greater success in Mississippi and felt he and his army MUST win a strategic position while forcing the Union armies to send troops from the Mississippi region to defend their homeland. He decided to invade Pennsylvania, capture Harrisburg thereby securing rations and supplies for his Army.

First stop was the movie theatre with a well done and very informative presentation, then came the cyclorama which was a sight to behold.  Paul Philippoteaux was commissioned by Chicago merchant Charles Willoughby in 1882 to paint a cyclorama of Pickett’s Charge, the final battle on July 3, 1863 for $50,000 (a little over $1M today). It took a team of 20 artists a year and a half to complete.  He ultimately painted four versions for Chicago, Boston, Philadelphia and Brooklyn.  It is the Boston/second version that survived and found its way to Gettysburg.  The painting is 42’ high and 377’ in circumference, weighs over 4 tons and depicts over 20,000 people and horses.  It’s the largest painting on display in the United States.  Between 1891 and 1901, it was moved several times, a large portion of the sky was cut off, stored in a 50’ wooden crate in an open lot, vandalized several times and set afire twice.  Its last restoration, beginning in November 2005 and reopened in its current location in September 2008 was its most extensive, taking almost 3 years to clean, repair, replace (the missing sky) and rehang into its original hyperbolic shape.  We were awestruck with the half-hour presentation!

The Gettysburg Foundation, along with the National Parks Service, has a team of 150 licensed battlefield guides that can be hired for a two hour personal tour of the Battlefield.  We decided this was a “not to be missed” opportunity and we were so thankful that we did.  John Krohn, a physician originally from Minnesota and then 35 years in Wilmington NC, has spent 17 years at the Battlefield.  Now that he & his wife have retired, they moved to Gettysburg for the express purpose of supporting the ongoing education to future generations of the battle and its importance to our country.

Upon learning we were from North Carolina, he tailored our tour so that we would see it from the North Carolina troops perspective – where they fought, what they encountered and how far they advanced.  As is normal for these tours, he drove our car and the three of us had a delightful two hours criss-crossing the approximate 10 square miles of the battlefield.

The 26th North Carolina Regiment, suffered tremendous loss here – one in four Confederate Soldiers lost was from North Carolina.  They fought valiantly on Day 1, which saw the South turn back the Union soldiers, but many historians believe that General Ewell’s failure to drive them off Cemetery Hill was the lynch-pin of disaster for the Confederates.  NC regiment rested on Day 2 and were then at the center of Pickett’s Charge on Day 3.  The Union has created the famous “fish hook defense line” with Little Round Top at the base, Cemetery Hill at the center/crook and Culp’s Hill at the hook.  Lee’s belief was that the center would be most vulnerable, but that was not the case.  The stone wall at Cemetary Hill was a major defense line, which Virginia soldiers did scale but the North Carolina soldiers actually penetrated the Union defenses some 60’ deeper, but could not reach the stone wall.

At the end of three days, the Battle of Gettysburg would be the bloodiest battle of the War, with 11,000 Union & Confederate soldiers killed or mortally wounded, 29,000 wounded and survived and another 10,000 “missing” (mostly captured).  That’s 10 times the American casualties on D-Day!

Our brains were full and our hearts heavy as we felt the magnitude of this battle and the perilous position our country was at this point in its history.  Homes, stores, churches and schools all became hospitals to care for the wounded – both Union & Confederate often in the same room.  General Meade, leader of the Union forces, requested the Federal Government to dedicate a National Cemetery, where a long number of the Union soldier’s remains are interred.  Many families over the coming months would travel hundreds of miles to attempt to identify and recall their lost loved ones.  In November, 1863, President Abraham Lincoln would travel to Gettysburg by train to deliver his famous 3 minute speech at the dedication of the National Cemetery.

Day 2 took us back to the Visitors Center – this time to board a bus from the quick 10 minute ride to the Eisenhower Farm.  As has been a hallmark of our travels these past years, we seem to often arrive at “just the right time” to celebrate a major milestone.  This time, it was the recognition of the 100th Anniversary (July 8, 1917) of the beginning of World War I.  As a young Lieutenant, having joined the Army to secure an education in 1911 and graduating from The US Military Academy (West Point) in 1915  Ike was stationed at Ft. Sam Houston in San Antonio, where he brought his young bride, Mamie Doud Eisenhower upon their marriage in July, 1916.  Lieutenant Eisenhower was responsible for training National Guard units to protect the Mexican border.

In 1918, he was appointed Commander of Camp Colt in Gettysburg. Through many promotions, which often denotes moves, Dwight & Mamie lived primarily in military housing and it wasn’t until he retired from the Army in 1948 that they purchased their one and only home in 1950, which today is known as The Eisenhower Farm.  Major renovations and additions to the house (completed in 1955) and addition of two adjoining farms made the now 650 acre cattle farm a joy for them and a retreat for the Eisenhowers.  In the mid-1950’s, the PGA installed a putting green (and sand trap) for Ike’s pleasure.

Radios in the Secret Service Office

The original house was built in two phases and then a third phase on the left of the two-story portion.  The Eisenhower’s also added the “man cave” (bottom right) using beams from the original log home that was found during their renovation of the original structure.  The photo top right is in the milk shed of the barn that was used by Secret Service – just couldn’t resist a picture of the Motorola radios!

Although Eisenhower retired from the Army in 1948 as Supreme Commander of Allied Forces, he would again be called upon to serve his country.  In 1949, President Wilson asks him to “informally chair” the Joint Chief of Staff, under the newly created Defense Department.  And in 1952, he was elected President of the United States, the first Republican in 20 years.

In 1960, Ike & Mamie returned to The Farm, where he lived until his death in March 1969 at the age of 78.  Mamie followed ten years later at 82; they are buried at the Eisenhower Presidential Library in Abilene, Kansas.

The house itself is rather modest (certainly by today’s standards) but is filled with gifts they received and items they acquired during their many years of travel and service.  After a great tour of the house and a visit with several of the WWI reenactors, we took our leave. 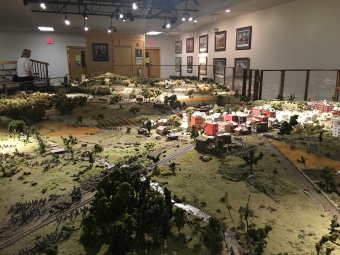 Our last stop was the Gettysburg Historical Museum, which houses the largest military diorama in the US.  It was quite well done with a voice-over presentation of the battle and the impact to the town of Gettysburg.

Remember when I said we seem to “be in the right place” – not always does it serve us well!  This weekend was Gettysburg Bike Week, so by mid-afternoon Saturday, we were thrilled to return to a quiet afternoon & evening under our awning with Contessa.  We’ll head northeast on Sunday morning with a destination of Newport RI by Monday. afternoon.

One thought on “Gettysburg PA & the Battlefields”