Having bid our dear friends “Adios” until Marathon next winter, we did what we always do – get up and get going early. Well, at least until we had Contessa and The Toad Hitched!  There is a comfortable routine, and supporting checklists, to make sure all systems are go and the final step is to check the lights and that the arms on the Blue Ox hitch lock in place. Left turn light good, right turn light good, no brake lights – check it again, left good, right good, no brakes lights on either vehicle. Our neighbor Gary (campgrounds and marinas are very similar in the friendliness of our neighbors) had been admiring Contessa and immediately said – “Where’s your fuse panel”.  Sure enough, after some searching of the schematic, F28 Brakes was located and the 15 amp mini-fuse was blown.  Pull out the spares – yep, have 5, 10 and 20 but no 15!  “No problem”, says Gary – “I’ll get you one of mine.”  He returns with sheepish grin on his face – he has 5, 10 and 20 and no 15. A quick call to the Advance Auto Parts, disconnect The Toad, run down to Middletown (6 miles away), get two packs of 15 amp fuses, install the errant fuse and away we go.  Now Gary has spares and so do we!

Timing is always a consideration, but never more so than planning to go around the inner belt (I-95) of Boston.  Even with the delay with the brakes, we were “right on time” for mid-morning on Friday.  We hoped it was the sweet spot between rush hour and the evacuation of Boston to the Beaches for the weekend.  The trip was much more pleasant than we anticipated, except for the little bug of a car that attempted to wedge himself into a line of stopped traffic exiting the interstate.  He only got his nose in and his back end was sticking out into our lane – right in front of us doing 60 MPH.  Amazing, Captain Bill was able to swing into the outside lane and miss the bug by at least an inch or two.  I suspect the driver is still shaking!

Our first destination in Maine – Old Orchard Beach – is known as the “Coney Island of Maine” and is aptly named with a quaint little town, tourist shops, carnival rides on the pier as well as a lovely beach. Wild Acres Campground is certainly that – wild and 75 acres of winding roads and tents/campers/cabins among pools, playgrounds, zip lines, BMX tracks and every imaginable entertainment.  Our site itself was quite lovely – except for only have 30 amp power and the view from the front window of the trash dumpster!  Fortunately, the weather was so perfect, we didn’t need the air conditioning, so 30 amps was manageable.

Saturday was a gorgeous day for a visit to Portland Head Light and Fort Williams on Cape Elizabeth and a walk on the scenic cliffs.  We then turned The Toad toward Portland and enjoyed a walk down Commercial Street on the waterfront and a delightful lunch at Portland Lobster Company (imagine that!)  Back home for a leisurely evening and campfire to cap a perfect day.

Just inland from Old Orchard Beach is Saco and a welcoming Trinity Episcopal Church, where we enjoyed services Sunday morning.  Leaving Contessa to the noise of the campground, we headed just north of Portland to the amazing hamlet of Falmouth ME to connect with friends made during our Great American Loop.  We met Lesley & Lance at Utsch’s Marina in early June, 2015 in Cape May NJ.  They had been traveling for several days with Tom & Peggie Perrotto – and while Tom & Peggie were not in our marina, Lesley & Lance pulled in with “Aeolian” – a sister ship to our first boat home, “Golden Dawn”.  They had purchased her that winter and were taking her home to Maine – we so enjoyed our tour and reminiscing about the years spent on Golden Dawn, including riding out Hurricane Hugo in Charleston on her and meeting life-long friends, Larry & Nancy Weir. 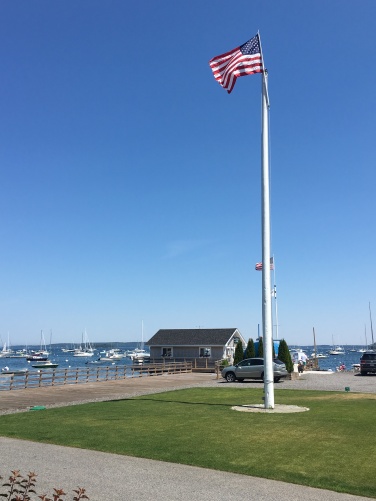 Lesley is the Dockmaster and Lance manages the launches for Handy Boat Marina – one of several establishments on the Bay that together provide the second largest mooring field on the New England Coast.  It was a gorgeous day – which evidently had been few and far between this season, so the marina and Dockside Grill were swarming with people.  We made a quick stop at the Portland Yacht Club, which was literally next door, which had been home to dear friends Art & Tricia during many of their years here in Maine.  While the waterside (and parking lot) was teeming with people, there was not a soul in the Club.  We had a superb lunch visit with Lesley and Lance on the patio of Dockside Grill – and look forward with hopes of reconnecting at their home in Franconia NH on our way back through in early August.  With all the goings-on at the marina, we were so appreciative that they were able to carve out two delightful hours to spend with us on this glorious Sunday.

Monday morning, Contessa and The Toad got hitched and off we went – Destination Trenton ME to explore Mt. Desert Island and Bar Harbor.  One cannot visit the coastline of Maine without a stop in Freeport, the home of LLBean!  With prior planning, we stopped at the Visitors’ Center right off the interstate, disconnected The Toad and found our way to Brewer’s Marina.  Mark and Denise Gillespie aboard “Island Office” had docked there about an hour earlier,  We met Mark and Denise also on Year 2 of The Loop, first at the fort in Oswego NY in early July.  We were all in a single marina awaiting weather to cross Lake Ontario.  Over the course of the coming months, we reconnected along the Trent Severn Waterway, The Bustards in Georgian Bay, along the coast of Michigan and many others.  It was great to have lunch and a visit – and, of course, some shopping time at LLBean!

It was so appropriate to have our picture taken at the marina with Mark & Denise, blueberries abound in Maine – even Blueberry Flatbread at Linda Bean’s Maine Kitchen Restaurant.

During our last two days of travel, Contessa’s chassis air conditioning which we use when underway (not to be confused with the roof top units for living) had been blowing hot air – which wasn’t much of a problem here in the northern climes, but would be essential upon our return to New York and home in August.  After some calls with local RV service providers, we were directed to seek a solution in Bangor, some 55 miles northwest.  We located Mike at Bangor Radiator, who does that type of work for the largest RV service center in Bangor and he agreed to see us on Wednesday (our second day for Bar Harbor area) at 1:00p.  With that settled, we set out to enjoy what would be our only day of recreation – and recreate we were going to do!  We drove the scenic roads of Acadia National Park, attempted a bike ride on the carriage paths (what were we thinking – it was Parkman MOUNTAIN!) and discovered Northeast Harbor.  Northeast Harbor is a quaint town on the southern coast of the island with lovely (read expensive) gift shops and art galleries.  Christopher Smith’s bronze sculptures took our breath away and we were thrilled to meet the artist.  As is often the case, the first question he posed was “Where are you from” and our rely of “Western North Carolina” prompted him to share that his daughter has gone to Camp Illahee in Brevard for eight years.  The look on his face when we told him that was our hometown was priceless.  We shared a delightful chat as we told him how much we enjoy Brevard – and his artwork!

A quick cruise through Bar Harbor and a stop at one of many local pubs had us longing to be back at the coach for a relaxing dinner & evening.  A stop on the way at Down East Lobster Pound for a dozen fresh oysters for our first course was a real hit.

As we parked the car, we noticed R&R Automotive directly in front of us – a source for air in our drive axle outside tire, which was reading a bit low.  We decided to call them first thing Wednesday morning in hopes of addressing the tire pressure on our way out to Bangor.  Again, we were thrilled with such a positive response to our need – “just come by on your way out and we’ll take care of it”.  After advising the office that we were leaving (and leaving The Toad) but would be back, we pulled out about 10:30a, allowing plenty of time for the tire and then the 1½ hour ride to Bangor.  Randy (owner of R&R) was pleasant, efficient and thorough in his investigation of the tire.  We continue to enjoy the easy way of life and the willingness to chat about anything and everything as we meet new people.  We settled up on his services and mentioned that we were headed to Bangor for the air conditioning.  “Well,” he says, “I do that type of work – if you want me to take a look at it and save you the trip to Bangor.”  How could we pass that up?!?!

Not only did he have the expertise, he enjoyed explaining every aspect of his analysis, location of the various components of the air conditioning and the results of his findings.  He quickly ascertained the only issue was the need to recharge the unit – which he could do right after lunch.  We quickly agreed, called Bangor and thanked them profusely for being willing to help us – and had a light lunch aboard Contessa while Randy went to lunch and secured the proper gauge from Napa Auto Parts to complete the job. So, by 2:00p, we were back at the campground, Contessa settled in for another evening and we had a bonus afternoon around Acadia National Park!

Off we went to find Bass Harbor – having been enticed by Cousin John and a picture of him & wife Trudy there during a visit some years ago.  We found what we think is the same spot, but while they were in heavy muk-luks, we sat on the patio in the glorious sunshine for our afternoon respite.

As we enjoyed the sun on the back deck, with a glass of Blueberry Ale, the fog rolled in and then back out!

A drive back thru the park and a stop in Southwest Harbor for a lobster cracking device got us prepared for a second visit to the Down East Lobster Pound – this time for a 2¾ lb lobster fresh from the docks.  Captain Bill smiled all evening as he cracked and dined on the luscious tail – and saved the claw meat for omelets and lobster roll sandwiches later in the week!

A fire in the firepit was the perfect end to our bonus afternoon and successful day. Tomorrow we head to Canada!