As we drove thru the Nova Scotia countryside, we savored our eight days in this idyllic land and promised ourselves we would return.  The people were absolutely delightful, the landscape a gentle blend of mountains and oceans, and the weather was glorious – we felt truly blessed.

It was an easy travel day, and while the mileage was more than we “normally” do, it was all on the great Canadian highways.  We departed Martin’s River early and traced our steps back thru Halifax then headed north to our return to New Brunswick.  Along the way, we passed the highway exit for Stewiecke, Nova Scotia, touting “halfway between the Equator and the North Pole!”  Our stop for the night was on the north side of Moncton, with a pull-thru site at a campground less than a ½ mile off the highway.

One component of land yachting vs. sea yachting  —  there are very defined “quiet times” at campgrounds, so even though we might be ready to roll at 6:30a, we wait until the normal 8:00am end of quiet time to fire up the diesel engine.  That is exactly what we did the next morning and were on the highway long before 8:15a – headed for the US and a couple of nights close to Bangor, Maine.

Chris, owner of the KOA Campground, was entertaining and obviously totally committed to making his facility a great experience for everyone.  He and his wife have owned it for five years, after spending 31 years near Ft. Myers, Florida.  We enjoyed our stay – and will reconnect with them in December, when we will all be at KOA Madeira Beach at Christmas!

One of the many things we enjoy is a “road trip” (to some known as a “Fishcapade”), when we head out (by toad/car) without a timeline or destination.  The adventure and the thrill of the find is a great part of the freedom we are enjoying so much.  We headed, amazingly, to the coastline in search of a real Lobster Pound.  And, boy, did we hit the jackpot!

Belfast, Maine is a quaint town with a healthy downtown commerce (read tourist) with vibrant harbor and waterfront area.  American Cruise Lines brings the “American Constitution” a 175 passenger ship into Belfast as one stop in their seven day adventure of the Maine coast.

Across the harbor from the town and waterfront is Young’s Lobster Pound.  A beautiful day provided the setting for a crowded dock & deck at Young’s – the lobster salad was fresh and crisp, the grilled haddock was simply mouth-watering and the potato salad was out of this world!  We had a leisurely lunch, a few stops at must-see shops and were home by late afternoon, ready to prepare for an early departure the next morning.

Our original travel plan took us on secondary roads of Route 2 through the White Mountains of New Hampshire and the Green Mountains of Vermont.  We had encountered an issue with the air brakes on The Toad (Jeep) when we pulled into our site in Prince Edward Island.  While it wasn’t an issue with the topology of the Canadian Maritimes, we were hesitant to take Contessa up and down (especially) narrow mountain roads without the brakes on the Toad.  We’ve said all along the plans are made to be altered – and with a bit of research, more than a few phone calls and some assistance from our Camping World in Hendersonville/Asheville, we got an appointment at the Camping World in Chichester New Hampshire for 9:00a Wednesday morning.  Out of Bangor nice and early Tuesday, we took the southern route back to Portsmouth New Hampshire and then across to Chichester, arriving by early afternoon.  We checked in with CW to reconfirm our appointment and then headed for Great Meadow Campground, less than a mile away.

Can’t Resist A Buck A Shuck!

Bright and early, we appeared at Camping World.  Kass checked us in – confirmed that we were waiting for the vehicle and the cell numbers were correct – and The Toad went into the work bay by 9:00a.  There is only so much wandering around the store, sitting in the lounge and touring campers a person can do – and we’d wander by the Service Deck about every 20 minutes in hopes of finding Kass and getting an update.  Finally, at 12:20p, she’s at the desk and then the dreaded words – “Oh, the technician wants to speak with you”.  Turns out, the tech had identified the problem within 5 minutes of the Jeep being in the bay and had asked Kass to contact  us.  There is a “break-away” switch that applies the brake if it detects the toad has broken away from the coach.  This plug had been pulled out of the socket perhaps 1/8” – but being newbies and without any documentation or troubleshooting materials, we missed it.  So the tech had been waiting for us for three hours and it’s now 12:30p, so he had to go to lunch before he could connect the toad with the coach and test his theory.  Six hours and $170 later, we had learned a few valuable lessons!

Fortunately, our destination was only 46 miles away – and Ames Brook Campground was by far the most beautiful site we have seen on the entire trip!  The owners are pleasant and run a tight ship.  When a site is vacated, a young man on a golf cart arrives within 5-7 minutes.  He clears any debris, trims any bushes or grass, blows the site clear – and it’s ready for the next guest.  All the sites have tree line barriers between them, the wi-fi is strong and reliable and there’s  a good combination of seasonal and transient campers. 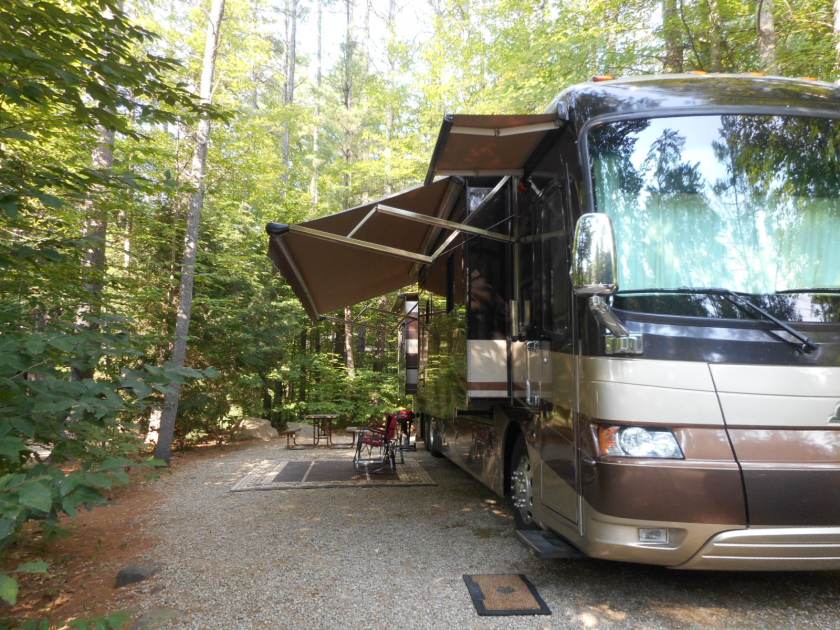 Ames Brook meandered through the Campground and right behind Contessa

We love the Lake Region of New Hampshire for so many reasons.  Dear cousins, George and Cherry Tyler live in Laconia, the lakes are beautiful (Squam Lake was the film site for On Golden Pond) and the plethora of wooden boats (ChrisCraft, Garwood and Hacker) are  all close to our hearts.

Thursday, we headed around Lake Winnipesaukee to Wolfeboro enjoying the views and vistas.  As we drove up Route 3, Bill thought he recognized a “memory” from years ago that we promised ourselves we would check out on the way back.  The town of Wolfeboro, named for British General James Wolfe, is a haven for boaters and water lovers during the season.  With a natural harbor, Wolfeboro was a center of commerce when transportation relied on water for goods and services, as well as personal travel.  As every town is want to do, they have a “claim to fame” and Wolfeboro’s claim is they are “The Oldest Summer Resort in America” as some of the country’s wealthiest and most prominent families of the Northeast (Boston, Philadelphia and New York) would vacation here.  As well, many influential international visitors have enjoyed the peace and tranquility, including such names as Prince Rainier and Princess Grace of Monaco and French President Nicolas Sarkozy quite recently.  A trolley tour of town, a delightful lunch at the Wolfeboro Tavern, a visit to the Wooden Boat Museum (imagine that!) and a stop at the Butcher & Seafood Market completed a delightful day. 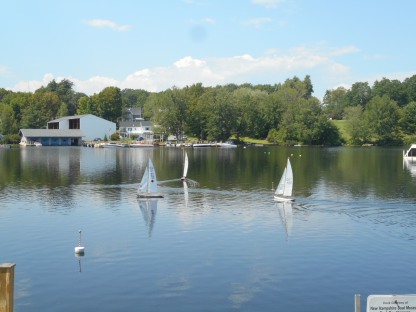 Amazingly, we remembered to check out Bill’s “memory sighting” on the way home – and sure enough, and much to our surprise, it was the quaint roadside motel complete with tiny restaurant that we had stayed in 16 years ago when we visited the region during the Antique Boat Show then held in Weirs Beach (it has since moved to Wolfeboro).  When we stopped for pictures, the owner came out and chatted with us – and invited us to return for Saturday morning breakfast, as her husband would be cooking!  It was superb! 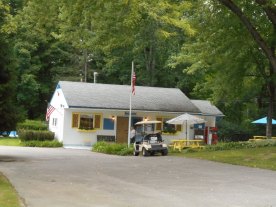 But what Bill had first seen was the street sign up the road from the motel.  We love to check out the interesting names of roads as we traverse the backroads of our beautiful country.  This one has always been our absolute favorite!

Cousin Cherry had had cataract surgery on Tuesday, so we were thrilled that she was up to a road trip on Friday and George was a willing chauffeur!  They joined us at Contessa for a tour and then a scrumptious lunch at The Common Man.  It was so good to “get a visit” and we look forward to seeing them this winter on Anna Maria Island.

Our last stop in the region was the Squam Lakes Natural Science Center in nearby Holderness.  It is a ¾ mile walk with animals native to this area, including mountain lions, bears, birds of many species and fish of the waterways.  It is truly an outstanding place for learning for young people and a joy to encounter at any age.  These animals have been injured or for some reason cannot survive in the wild, if released – a loving and safe environment for them. 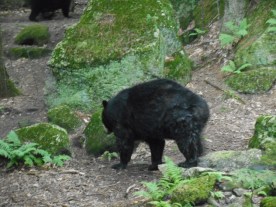 Then it was back to Contessa and prepare for the next leg of our Journey, which will include stops in four locations in the State of New York while avoiding the City!