On schedule, we left Desert Shores at 9:20 Sunday morning to clear skies but more wind that we would have liked.  Captain Bill handled Contessa beautifully as he battled crosswinds along I-10.  We took Loop 303 around Phoenix (what a dream) and arrived at our first night’s destination of Pioneer RV Resort at 2:10p.

There is a lesson or story behind this word “resort”, as it can have a wide range of application.  Pioneer RV certainly fell within the broader definition, but the people were extremely pleasant, facility easily accessible to I-17 and north of Phoenix for an easy get-away the next morning.

A special treat was the large saguaro cactus in the center of the property in full bloom – and the American Flag flying proudly the next morning — Memorial Day. 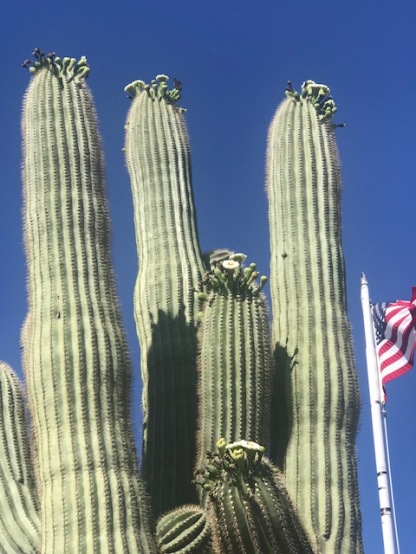 We timed our departure to arrive Sedona at noon – the beginning of check-in.  We pulled into our “slip” at 12:00 on the dot!  What a lovely spot and within walking distance to Tlaquepaque (ta-LOCKEY-POCKEY) and the galleries. 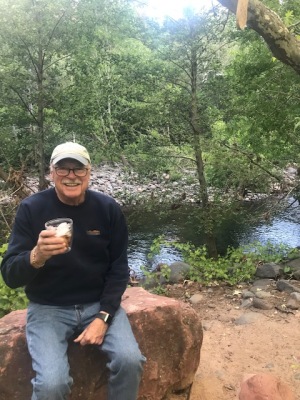 The mesas of the northern Arizona highlands have a stark and graceful beauty.  The sculpting of these mesas into timeless monuments will take your breath away.  The Native Americans tribes of Hohokam (hoo-hoo’ kam) lived here as early at 700 AD.  Then came the Sinaguan (meaning “without water” or farmers who rely solely on rainfall).  They were forced to leave after a violent volcanic eruption in 1066 AD, but returned along with the Anasazi (or “Ancient Ones”), where they built sophisticated multi-storied pueblos, whose remains still stand today.  They left abruptly in the late 1300’s, some believe run out by the Apache.

The first white man believed to have travel to the Red Rock Country was Antonio de Espejo in 1583.  Pioneers, prospectors and trappers began to arrive in the early 1800s.  In 1901, a Pennsylvania Dutch couple, Theodore and Sedona Schnebly arrived and purchased 80 acres.  Hoping to get a post office established there, Theodore submitted the name “Schnebly Station” but it was rejected because it was too long.  His brother suggested using his wife’s name and in 1902 the town was officially named “Sedona.”

Author Zane Grey wrote his famous book “Call of the Canyon” here and in 1923 convinced producer Jesse Lasky to film the silent hit movie based on that book in its actual setting.  And the rest, as they say, is history.  Since then literally hundreds of movies have been filmed here and many actors/actresses have homes here.

The sun rises early here – and so do we!  Tuesday morning found us on the Munds Mountain Trail before 9:00a.  We had a lovely 4+ mile hike as we circled the base of Munds Mountain. 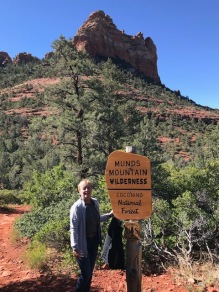 At every turn, we were stopping to look up and look down – to the amazing red rocks surrounds Sedona and the native vegetation at our feet. 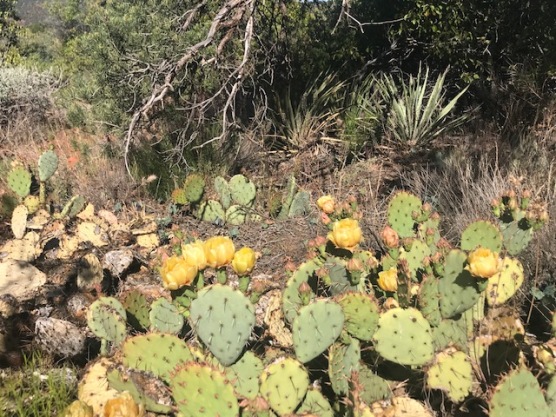 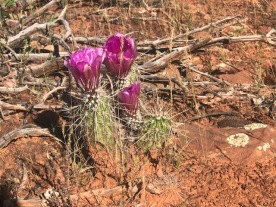 The Prickly Pear cactus in yellow bloom, gives way actual edible “pears” from each of the nubs on the top of each paddle.

The Perry’s Yucca (known in other locales as a “Century Plant”) grows for up to 25 years before it sprouts its stalk.  The stalk will grow 3-4 inches a day, then bud, and finally bloom for 2-3 months.  The following year, the entire plant will die.

The afternoon was spent in a 4×4 Jeep adventure into a canyon.  There were only two couples and our quite knowledgeable guide bouncing from rock to rock down a rough hewn trail. 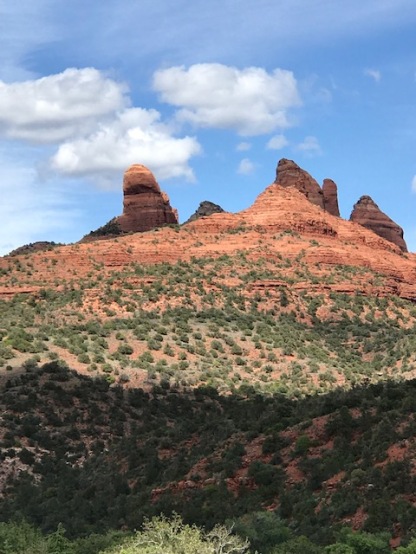 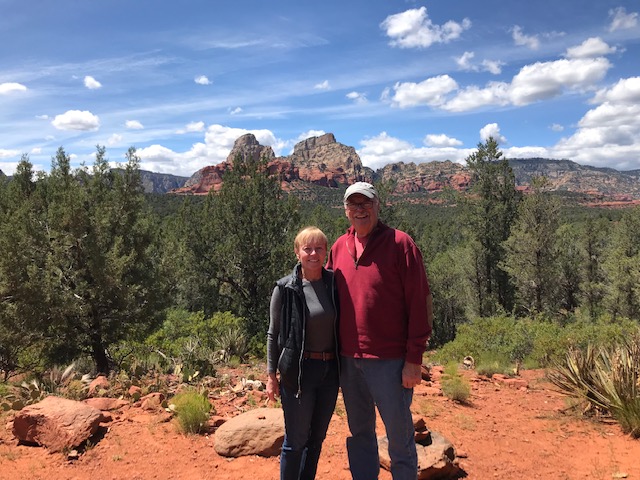 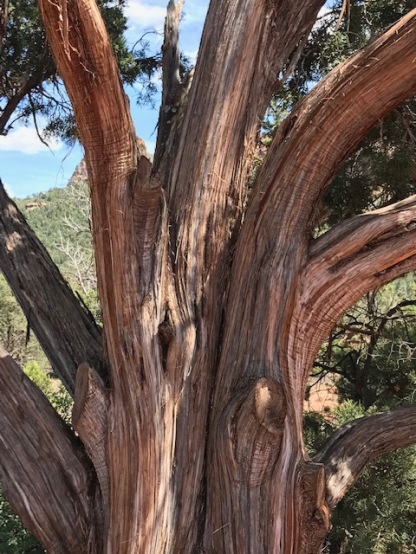 The bark of the Juniper Tree was amazing!  The Native Americans used the bark to make fabric!

Back to our “home on wheels” by late afternoon for a quick shower – and then off to a “restaurant not to be missed” according to dear Sylvia from Desert Shores.  And she was certainly RIGHT ON!

The Elote Cafe has won awards year after year – and their success continues with a rather small but amazing menu.  They are open 5-9p Tuesday-Saturday – and you better get there at 4:30p, if you want a seat!  At 7p,  you can almost count on a 1-2 hour wait for a table or a seat at the bar.

The Captain & I are truly “bar flies” so even though we did arrive at 4:30p, we chose two seats at the bar and were not disappointed.  Friendly conversation with the bartender and our seat neighbors blended with amazing cocktails and out-of-this-world food!  You MUST start with Elote, which is fire-roasted corn with a cream & poblano sauce.  Then it was carne asada for the Captain and smoked brisket enchiladas for the Admiral.  The beauty of dining at 6:00p is that you can sleep that night!

We delayed our departure on Wednesday morning until check-out time (11a), as we only had 90 miles to travel to Williams AZ, which at a 1p check-in.  Again, perfect timing as we pulled into registration at 12:59!  Tomorrow is the Grand Canyon by train!

2 thoughts on “The Many Faces of Arizona”